For good or ill – probably the latter – I have crossed paths with Bousfield and LeBlond’s ‘Cadborosaurus’ construct. The authors used photographs of an unusual carcass and eyewitness accounts to describe ‘Cadborosaurus willsi’ as a new species… of Northeast Pacific reptilian Hippocamp. Every aspect of their description is high-grade pseudoscience and since there’s so much wrong to deal with, I intend for this page to serve as a hub for all my criticism.

Bousfield and LeBlond argued that a small, unidentified marine creature captured by an ex-whaler not only represented a juvenile ‘Cadborosaurus’ but also provided evidence of reptilian affiliation. My colleagues and I countered that the sighting was probably a garbled recollection of a known fish:

We got a response:

And we struck back:

Having run out of potential pipefish puns, this appears to be the end of the “discussion” on baby ‘Cadborosaurs’ – so what next? There are some other ‘Cadborosaurus’ topics which remain intriguing: do the actual reports show any actual patterns? How similar are these reports to those from other regions? Can the Naden Harbour object ever be identified?

Bousfield and LeBlond used a “primitive/advanced” (or “plesiomorphic”/”autopomorphic”) index to, ahem, “classify” ‘Cadborosaurus’. It didn’t make any sense.

How Not To Go About Classifying Marine Vertebrates… And Cadborosaurus

When Woodley et al. (2011) initially surfaced, I published a lengthy series of background articles on my old blog.

A Baby Cadborosaur No More. Part 2b: Hagelund’s Account – annotated

A Baby Cadborosaur No More. Part 3: Dealing With Traits

A Baby Cadborosaur No More. Part 6a: Cold Water on the ‘Reptilian Hypothesis’

A Baby Cadborosaur No More. Part 6b: Reptilian Reproduction

A Baby Cadborosaur No More. Part 8a: Pipefish in a Bucket

A Baby Cadborosaur No More. Part 8b: The Bay Pipefish

A Baby Cadborosaur No More. Part 9: … and the rest!

Despite their importance to ‘Cadborosaurus’, there are few readily available high-quality images of the Naden Harbour object online and no one source (dead tree or electronic) has a complete collection. Until now. I scanned in the images at a reasonably high resolution (600 dpi) and adjusted the levels to as closely resemble the originals as possible. If anyone is really interested in the original .tif files with unmodified levels, I (should) still have those, so send me an e-mail.

The remaining photographs were taken by Mr. G. V. Boorman, one of which is superficially  very similar to Huband’s but taken at a slightly different auxiliary angle.

The side view taken by Boorman is by far the most interesting photograph and exists in two different versions reproduced in Hagelund (1987) and LeBlond and Bousfield (1995). The Hagelund version is cropped and has a higher resolution of the object itself. There is a significant difference in contrast between the versions, and to my perceptions to LeBlond and Bousfield version has lost detail thus making it likely Hagelund’s version most closely resembles the original.

It would be quite interesting to track down and scan the originals, although being on the wrong side of North America they’re a bit out of reach at the moment.

The 'Cadborosaurus' illustrations in LeBlond and Bousfield (1995). 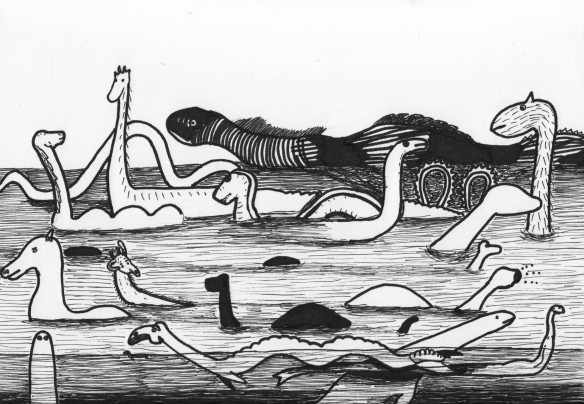